Time to Taste the Culture of Denmark

Want to eat like a Dane? Start by putting Denmark at the top of your travel bucket list! A perfect launching point for the rest of your Danish and Scandinavian itinerary – the capital Copenhagen is an excellent place to start your adventures. And when here – why not taste Denmark too? No. Don’t lick the landscape. That would be gross. But there are some uniquely Danish foods that are truly delicious and worthy of your sampling.

BUT WHAT MAKES A FOOD DANISH?

I believe the following five foods are the most uniquely Danish. Based on my very scientific online straw poll and discussions amongst family and friends – the same dishes kept coming up again and again. Several people highlighted other foods that are very popular in Denmark and do have their own uniquely Danish twist. But to make it here on this list – you have to:

Without further ado, I offer you –

The 5 Most Uniquely Danish Foods:

How do you tell someone to calm down in Danish? “Spis lige brød til.” Eat some bread. And not just any bread. In Denmark – you eat rye bread. Don’t think New York deli rye bread. This is rugbrød. A dense, dark, chewy, seedy rectangular loaf that could potentially be used as a weapon if need be. Sliced thin and smeared with liver paste (leverpostej) – you now have the equivalent of peanut butter and jelly in a Danish school kids’ lunch. WHAT? Ew. But, it’s actually good. Try it. Once. For me. And Denmark.

On the beautiful island of Fyn – in between Sjælland (where Copenhagen sits) and Jutland (where Denmark connects to mainland Europe) you can find field upon field of rye waving over the landscape. Rye is the base grain of this popular Danish sourdough loaf. Even if you can’t stomach liver paste – you can’t get out of Denmark without trying rugbrød. My favorite rugbrød purveyor is Det Rene Brød (The Pure Bread) – they offer several seeded all organic options. Ask and they will slice it for you to the perfect Danish sandwich thickness. Smear simply with some creamy Danish smør (butter) or use it for…

Smørrebrød literally means butter and bread. But this Danish classic is so much more. And can you guess what kind of bread? Of course. Rugbrød. I learned all about smørrebrød at a workshop hosted by the National Museum during the Golden Days Festival of Important Shit. (I didn’t make that shit up. There were signs ALL over town. I love the Danes.)

Smørrebrød has a historical basis in Danish food culture – it has been eaten for centuries. As a way to extend the life of the dense rugbrød, sandwiches were created and served as a traditional frokost or lunch. The early versions were simple and utilitarian – bread smeared with animal fat and topped with leftover fish or meats.

What smørrebrød has evolved to is nothing short of an art form in some cases. And you can find it in cases all over town in about one million iterations – some with toppings that would be familiar to the un-Danish palette – like roast beef or chicken salad or fried fish. Try one of those. But also – go out on a limb and try one of the more uniquely Danish options – like pickled curried herrings. It’s delicious. I’m serious. Take my word for it. Especially when washed down with a little snifter of house-infused snaps (akvavit). Skål!

My favorite place for modern Danish smørrebrød is Aamman’s. There is one on Nordre Frihavnsgade or if in the inner city try Aamann’s 1921. If you want less minimalist Dansk design with your open-faced sandwich and a little bit more classic atmosphere with your smørrebrød options – try Restaurant Kronborg. But please. Do not pick this sandwich up. It is to be eaten with a knife and fork.

Ok – how can PORK itself be uniquely Danish? I can hear you asking through the interwebs. People eat pork all over the world, you say. That is true. But did you know that Denmark often tops lists for per capita pork consumption? And they are one of the major exporters of pork. (We won’t talk about how that impacts the environment right now, only how it affects Danish eating habits.)

HOW Danes eat pork – now that is uniquely Danish. In 2014 over 63,000 Danes voted to determine what they believed should represent Denmark’s National Dish. Winner winner, pork dinner – according to the Danes that participated – was stegt flæsk med persillesovs (crispy pork with parsley sauce and potatoes). Made with thick cuts of pork belly fried crispy and normally served with a creamy white sauce and potatoes.

Pork and potatoes are mainstays in Danish cuisines, elevated to ceremonial status when served at a traditional Christmas dinner. Flæskesteg is the specially cut Danish pork roast cooked with the crackling intact. I will admit – this one IS amazing. You can find it at many restaurants around Copenhagen, but if you want to try to make it yourself and wow your Danish neighbors (or just your own family) – try this recipe and get your roast from the butcher Gourmandiet. They know how to do pork. They know how to do all meat actually. Don’t be afraid to ask them for some tips on traditional Danish roasting techniques – they are masters. 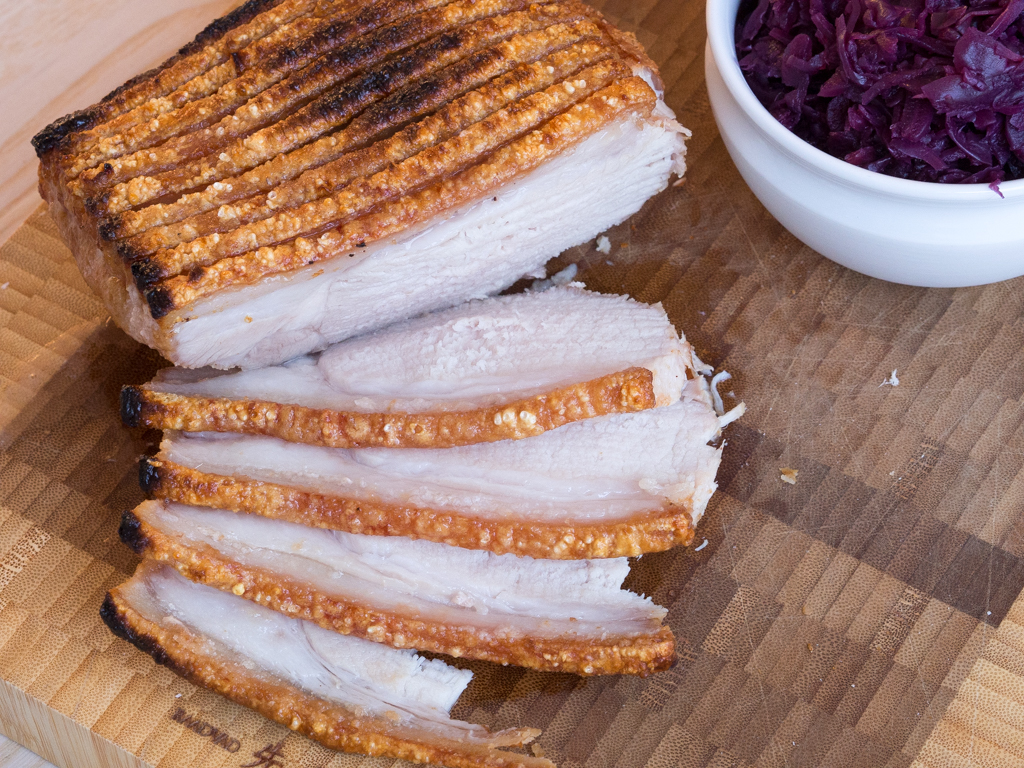 I have a theory that all cultures have their own versions of “fried dough.” And while you may instantly think of “Danishes” when you hear the word Denmark – the pastry you are familiar with is actually called wienerbrød here – or “Viennese bread” because of it’s Austrian origins as it turns out. Not DANISH at all, really. In my opinion, more uniquely Danish in the dough category are the round, crazy cute, spongy little yummy æbleskivers.

The word means “apple slices” but don’t be fooled – no apples were harmed in the making of these little round pancake-like nuggets, traditionally served around Christmas time in Denmark. Danes are extremely dedicated to their Christmas foods. Most of them I can get behind. Served with a little jam and powdered sugar – they are the perfect complement to your warm gløgg (Danish mulled wine) after surfing a Julemarked (Christmas market) or chopping your own Juletræer (Christmas tree.)

Danes LOVE sweets and eat it in many iterations. You may be visiting outside the Jule (Christmas) season making aebleskiver harder to come by. Don’t worry, there are amazing bakeries here. Just look for the pretzel-shaped bageri (bakery) sign all over and you’re sure to find something to please. Cake is somewhat of a national obsession and an accepted and expected way to conduct any negotiation, meeting, coffee date or celebration. And you should bring the cake. Easier sometimes than bringing (or buying) a whole kage (cake) is to offer a flat of flødeboller to share.

This is what the kids all bring for birthdays at school. Not exactly cake, in the traditional sense – these marshmallowy cream-filled and chocolate-covered little nipples of sweetness apparently originated in Denmark and are sold EVERYWHERE.

Start with a cookie type biscuit or small marizpan disk; pipe some fluffy creamy goodness in a myriad of flavors; dip or otherwise shower in chocolate and top with coconut, raspberry chips, licorice sprinkles, nuts or otherwise. Now you have a Danish flødeboller. There are wide ranges in quality when it come to flødeboller. The good people over at Scandinavian Standard have generously already tried many around town for you. Or you can check out Laura over at The Copenhagen Tales – she also has a great round up. When you are lucky enough to enjoy one of the beautiful and carefully crafted cream balls from the likes of Summerbird chocolates – I might suggest NOT using your head to crack open the coating like the kids do!

So there you have it. What I believe are the 5 Most Uniquely Danish Foods. But where are the pickled herrings and salty licorice and red pølsers (hot dogs) and akvavit (Skål!) I hear so much about? Don’t worry – they’ll get their own list. Don’t agree with mine? Didn’t see your favorite? Leave me a comment and follow along. I’ve got a few more posts about the most popular foods in Denmark as well as the most Scandinavian flavors and dishes. What are the strangest foods in Denmark? Well some of them I’m scared to try to be honest, but for you – I just might. Boiled cod egg sacks sliced on bread (torskrogn) might be beyond me. But I have tried blood sausage! Not bad, not bad.